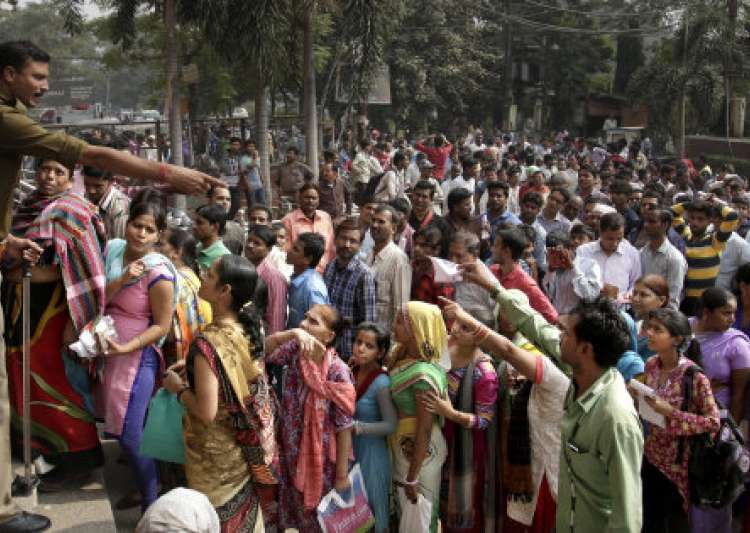 Demonetization – People lining up to exchange their notes

Alok has very aptly described demonetization in great detail and in very simple terms. Most of the news channels are reporting that the jury is still out about the effects of the demonetization process. Mr Arvind Kejriwal has gone on to describe it as the biggest scam of independent India. The BJP is praising it as the solution to most of the ills afflicting our country.

The nation as whole is presently going through a process of rapid evolution. If the country succeeds in implementing the process well, it will grow strong mental muscles. A body builder makes muscles through tough and strenuous exercises and not through living a sedentary life.

4 Minute Mile Moment. Humans believed for ages that it is not possible for an athlete to run a distance of a mile under 4 minutes. Some scientists even claimed that it is not biologically possible to achieve this feat. They felt that the human body is not made to undergo the strain required to attain a speed of almost 15 miles per hour (24.14 km/h, or 1 kilometer/2:29.13 minutes, or in 14.91 seconds). But Roger Bannister achieved this supposedly impossible feat by running over one-mile distance in 3:59.4 on May 6, 1954. This was a great achievement but the magic happened afterward. 24 other athletes achieved this seemingly impossible feat minute mile and it is a norm.

Delhi Metro. It took India almost twenty years to start the first phase of Delhi Metro in 2005. But after the implementation of phase one and its very wide popularity with the masses, the metro is already running in a number of cities and under construction in many others.

Indian Banks. Indian Banks especially the public sector banks were perceived by the public as inefficient and corrupt. The public was generally annoyed with their style of working and resorting to frequent strikes to further enhance their already high salaries. The employees of these same banks have now acquitted themselves very well during the demonetization. They have worked long hours and have done the task expected of them. Thus, they have improved their standing in the eyes of common man. They have also realized their true potential and abilities. These factors will make the banks more efficient and result oriented in future.

Private Cash Delivery/ Handling Services.  Private companies offering cash delivery and cash handling services have also done their assigned tasks well. It is heartening to note they have handled or are in the process of handling  almost 20 Lakh Crore worth of cash. It is creditable to note that in spite of handling such humongous amount of cash there have been no reports of cash looting or of any other mishap. Almost unskilled people are generally being employed by these agencies and these low paid employees with little formal education have stood the test of time and done their job in an exemplary fashion. This will lead to an increase in the ability of the employees of these agencies. The agencies themselves will feel more confident of taking on any task in future. The government will develop a confidence in the capabilities of private agencies and companies to undertake tasks of great importance on behalf of the government. This may lead to more privatization in the future thus making our government more efficient.

ATM Re-calibration. The private agencies involved in the re-calibration of the ATMs have also done the task of re-calibrating the machines in a very short period of time under a lot of pressure. It also worth highlighting that no reports of any faulty calibration of ATMs have been received so far. This special effort on part of the IT Companies will give confidence to the government agencies to trust them with more and more tasks in future.

Politicians.The politicians will learn that it is possible to take hard decisions which inconvenience the masses and still maintain a very good public rating. They will learn that the India of 21st Century is willing to stand in long queues for long hours for the bright future of their country. The politicians will also learn that they do not have to roll back any decision under public or media pressure if the decision is for the overall good of the nation.

Public.  The public is learning that there are free lunches in real life. They will learn to put up with difficulties in the short term for a better future of their children. This scheme is also likely to change the electoral equations in the country.

In conclusion, one can safely hope that the demonetization turns out to be a watershed moment in the history of modern India. This is probably the time when India will grab a chance of changing their attitude from “Chalta Hai” to “Ab Nahi Chalega”. This may be the proverbial “ tipping point” for India.